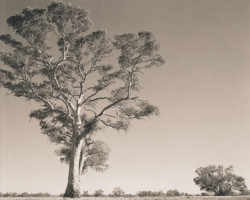 Stephen Tester has been fascinated with monochrome images ever since he made his first film contact print at age 9. The reliance of tonal values to convey the essence of the subject allows the viewer to be engaged with the emotional content experienced by the artist and at the same time permits the viewer a personal response to what they see. Stephen has concentrated on hand made photographic prints for over 15 years and mezzotints and photogravures for 5 years. His photographic work has been influenced by Michael Kenna, Paul Caponigro, George Tice and Gordon Undy; his Photogravures by Edward Curtis, Dorothea Lange and Alfred Stieglitz, and his mezzotints by Jessie Traill, C.R.W. Nevinson, Yozo Yamaguchi, Kazuhisa Honda and Graeme Peebles. Stephen exhibits in Melbourne, Sydney and regional Australia. His work is held by collectors in Australia, the UK and USA. He lives and works in Central Victoria, Australia.